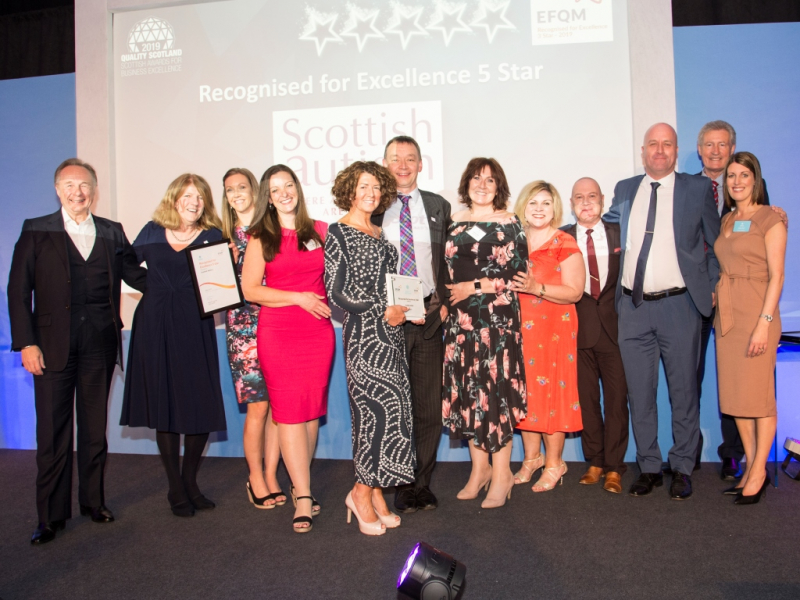 Scottish Autism has received a suite of accolades at this year’s Quality Scotland Awards for Business Excellence. The charity received a prestigious 5 Star Recognised for Excellence (R4E) Award in recognition of its commitment to achieving organisational excellence and its dedication towards continuous improvements. It also picked up the Good Practice Award for Adding Value for Customers and the Overall Business Excellence Award.

R4E is an Award acknowledged all over Europe for organisations demonstrating high levels of performance against the nine criteria of the comprehensive European Foundation for Quality Management Excellence Model (EFQM). It is designed to embed a culture of excellence for organisations which are focused on achieving the highest standards in their commitment towards people, suppliers and their wider stakeholder community.

The award followed a week-long visit during April this year by a Quality Scotland assessment team, formed of professionals from a variety of business backgrounds from across the UK. They met with the charity’s employees and service users, and scrutinised a number of its core services.

Commenting on the Awards, Scottish Autism’s Chief Executive Officer, Dorry McLaughlin said: “Achieving this prestigious 5 star Award demonstrates our commitment to excellence and continuous improvement both as an employer and service provider.  Through the valuable contribution of our passionate and dedicated staff, we have the ability to translate our vision of ‘a world where autistic people are understood and enabled to lead meaningful and fulfilling lives as valued members of the community’ into innovative service delivery and high quality support for autistic people and their families across Scotland.  We will continue to strive for excellence, both as an employer and in the services we provide.”

David Harkins, Scottish Autism’s Quality and Risk Manager said:  As a Quality Scotland Ambassador, I have seen how the EFQM model has benefitted Scottish Autism, our staff and the autistic individuals we support.  It has also been of huge benefit to my own personal and leadership development.  I completely champion the work of Quality Scotland and the EFQM model to embed a culture of excellence and continuous improvement for organisations across Scotland and beyond.”

29/05/2020
Scottish Autism is delighted to receive additional funding from The National Lottery Community Fund, enabling us to continue to support the autistic...
Read more

21/05/2020
Today the First Minster announced Scotland’s route-map out of the current lockdown restrictions. This route-map will come into effect, should the...