People often associate autism with that which they can see and observe, in other words a person’s behaviour. It is, however, important to recognise that autism is not a behavioural problem and that observable behaviours arise as a result of a range of complex and interacting factors. In clinical terms autism is considered to be a neurodevelopmental disorder. That is to say it is present from early childhood and disrupts typical psychological development (Boucher 2009).

Autism is associated with “qualitative impairments” in three areas, namely, social communication, social interaction and social imagination and flexible thinking. It should be noted that a growing number of people on the autism spectrum reject the term “impairment”. It is used here to reflect the terminology used in the current diagnostic criteria.

The implications of each of these areas will vary across the spectrum and from person to person. These examples are intended to be indicative rather than prescriptive and are given to illustrate the diversity within each area of the triad across the spectrum. It is also important to bear in mind that the impact from each area is not distinct and that a degree of challenge will be evident in all three areas.

Some examples of social communication issues are shown below.

John is 7 and is autistic. He has no verbal language but seems to understand some words and very simple instructions. He is especially responsive to language based on activities that are motivating for him such as swimming. John has been taught to make vary basic choices by introducing him to a visual communication system.

Sarah is 15 and has Asperger’s Syndrome. She is very talkative and can have long and detailed conversations. However, she has very little interest in conversations that are not focused on her current passion which is the Roman Empire. She will respond when people try to have a conversation with her, however, she will very quickly introduce her subject regardless of what has gone before. Sarah will approach unfamiliar people in shops and at bus stops to talk to them. She becomes very confused and distressed if they do not respond.

In terms of social interaction the following may be observed:

Kirsty is 5 and has Asperger’s Syndrome. She has just started school. She is happy to be in the playground with the other children but has very fixed ideas about who should play, what games should be played and how. She finds it difficult to take turns and becomes very distressed if the other children want to do things differently.

Ann is 24 she is an autistic adult and a severe learning disability. One evening she was lying along the sofa unwrapping and eating sweets. Due to her difficulty in understanding the needs of others she would not usually share them with others. It was therefore surprising when she reached out and tugged the hand of a member of staff who was sitting close by. However, it became clear that the purpose of this was not socially driven and instead of being given a sweet she formed the staff member’s hand into a cupped shape and then proceeded to push the empty wrappers into it, finishing by giving it a push in the direction of the waste basket.

Malcolm is 36 and is a very able individual who lives independently. He greeted a visiting professional returning from his holiday by saying ‘Peter, I know I’m meant to ask you if you had a good holiday, because I’ve been told that you will like being asked this, but I don’t understand why I should say this because I’m not actually at all interested in your holiday’.

The idea of social imagination is complex; we can be side-tracked by thinking that imagination is limited to creative, aesthetic or play activities. For people on the autism spectrum difficulties can be noted in such areas but the implications are more pervasive. Some examples are that individuals:

Sally is 6, she is autistic and has a learning disability; she loves to go to the local park close to her home. She enjoys playing on the swings and other equipment. Much as she loves this activity she becomes very distressed if her parents or teachers try to take her to an unfamiliar swing park. This can result in very distressed and difficult behaviour that can have an effect on the rest of the day. Sally has a similar reaction when her mum tries to take a different route to school in the car or goes round the supermarket in anything other than the order Sally is used to.

Kenny is 17 years old and has Asperger’s Syndrome. His dad suffers from severe headaches which are exacerbated by Kenny’s loud and repetitive questioning on his favourite topic. It was only when Kenny could see his dad in bed that he was able to understand that he was unwell. It appears that Kenny could not innately understand and empathise with his dad’s condition, however, if he actually saw dad in bed in the day time Kenny then had a concrete cue that he was unwell and was then able to adapt his behaviour.

The significance of understanding these three areas in relation to people on the autism spectrum came about mainly as a result of the work of Lorna Wing (1979, 1996). It was she who introduced the term “triad of impairments” in order to capture the core defining features of autism. In recent years the term “impairment” has met with a degree of resistance from individuals on the spectrum, their family members and some professionals.  Anecdotally there is a view that the term “impairment” reinforces a deficit view of individuals on the spectrum (for further discussion, see our language and terminology section). Wing’s work underpins the concept of a spectrum in autism and has formed the bedrock of our understanding of autism for many years. It has also provided the basis of the criteria that is most commonly used to diagnose individuals on the autism spectrum.

The Diagnostic and Statistical Manual of Mental Disorders (5th Edition –text revised) (DSM-V) (American Psychiatric Association 2000) and The International Classification of Diseases 10 (ICD 10) (World Health Organisation 1993) are the main criteria used to diagnose individuals as being on the autism spectrum. It is important to note that despite the terms used it is accepted that autism is not an illness. As knowledge and understanding of the spectrum evolves the criteria are subject to review and refinement.

Development and debate in relation to diagnostic criteria is useful and necessary in terms of enhancing the current body of knowledge available to clinicians. From a practice perspective, particularly for novice practitioners, ambiguity can make an already complex condition appear even more complicated. Establishing criteria is clearly important, however diagnosis relies on accurate assessment, understanding and interpretation as individual presentation is rarely straightforward and can often be subtle. Accessing a diagnosis later in life can be a fraught process as the availability of skilled diagnosticians can be limited (Public Health Institute Scotland, 2001).

There are substantial personal accounts that suggest that people on the autism spectrum may process certain sensory stimuli differently from those that are typically developing. This is an area that is relatively under researched in terms of our understanding as to why it should be that people on the autism spectrum experience sensory stimuli in the way that they do. Some individuals may be able to articulate the issues that result for them from being over (hyper) or under (hypo) sensitive to sensory input. There will however be many individuals who cannot articulate their experiences and whose reactions to sensory input may be interpreted as difficult or challenging behaviour.

An adult with Asperger’s Syndrome welcomed a visitor and admired her coat, saying it was his favourite colour, but then added that he wouldn’t be able to wear such a coat because of the NOISE it made; not a consideration that most people would consider when choosing clothing.

A young autistic child was experiencing considerable difficulty with toileting. When the situation was carefully examined it was discovered that the difficulties related to issues around the actual feeling of the toilet seat. When a modified seat was introduced, covered with a soft fabric, he was then able to successfully use it.

It should be noted that a growing number of people on the autism spectrum reject the term “impairment”. It is used here to reflect the terminology used in the current diagnostic criteria. 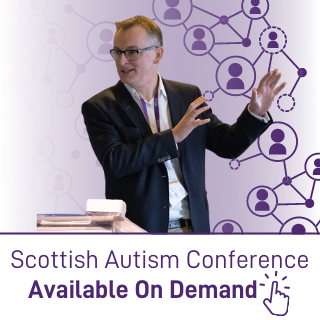 What is aspergers syndrome?