Personal Accounts of the Impact of Sport and Exercise 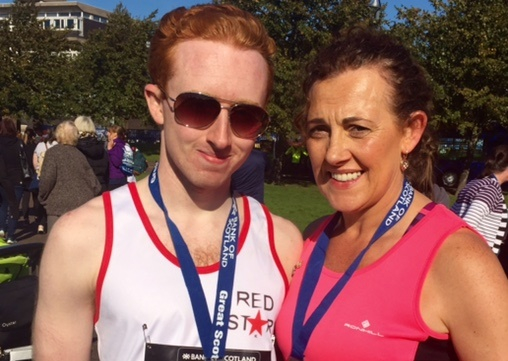 Life before training at my athletics clubs would be spent in my bedroom by myself. I just wanted to draw and play with Lego. I wasn’t active and didn’t do anything. I found gym too difficult to deal with. I didn’t enjoy or look forward to these lessons. After my experiences in mainstream primary school, being fit and healthy meant nothing.

Eventually I was moved to a new school. One day my amazing teacher at the time decided to enter me into the final of the P7 running competition. She knew going through the heats would be too stressful for me and the Head Teacher agreed that I could just run in the final. I did well in the finals, finishing second.

I started secondary school the following August. A short time after, a swimming instructor and a PE teacher my mum spoke to suggested I join an athletics club for people with disabilities.

I went along to Red Star Athletics in October 2009. I met Janice, the head coach, who was lovely, but initially I couldn’t join in. I would play in the long jump sandpit (I loved playing in sand, it was calming for me) as joining in scared me, as did speaking to new people and learning something new with strangers. Thinking back, I still felt lost from the time I had been in mainstream school. Being in groups was too much. However, my mum kept taking me to the track every week.

One night in February 2010 I finally got up the courage to join in and train with athletes in a small group, not a full session. It was a start. When I began training, it was demanding and stressful, being around people, always being afraid of saying the wrong thing. Having conversations with people wasn’t easy and getting jokes didn’t work for me. As we kept going I slowly began talking with the other members of the club. This was a stepping stone for improving my social skills as this was something I was lacking in and I am always trying to get better at. Social conversation can be difficult but the people at the club started to get to know me and it helped. I was also getting active.

My new-found interest in sport grew, as my mum found something new I could try: skiing lessons. We had problems, but then new things do bring a whole lot of challenges for me and my ASD mind. However, eventually, after many weeks of going and trying without success, a Disability Snowsport UK instructor took over the lessons. He got it. He understood me, how it wasn’t just straight forward for me. My journey of learning to ski then began. This led to more one-to-one lessons and the amazing experience of freedom in a one-to-one lesson with my instructor in the Cairngorm Mountains. I also, again with mum’s support and persistence, joined Temple swimming club, a club for kids and young people with disabilities.

Eventually I found myself competing in athletics for my club Red Star Athletics, swimming with Temple Swimming Club and competing in both swimming and athletics in Regional and National competitions. I found competing physically and mentally challenging often when I didn’t win, blaming myself for not doing well enough.

My mum deciding to join me and get fit herself has helped me. She gets why fitness is important to me mentally, as well as keeping me healthy for life and competing. She now helps to train me. Who’d have thought my mum would be my personal trainer! She also makes sure I eat well and we do training sessions together. I like that we can have some fun sessions as well as my personal training sessions. We still manage a laugh. I’m usually better with jokes. She says I helped her. I know we both helped each other change our lives through fitness. Her support in all I do with sport and fitness has meant I have been able to access opportunities I’d never have thought possible.

Sport has helped me to learn about working as part of a team, through Red Star AC, Victoria Park AC, Temple Swimming Club, being part of the Scotland West Teams for swimming and athletics, learning that it’s not just about winning, it’s about taking part, working on improving constantly, using skills you learn both in your sport and in life. Being on the autistic spectrum means stress and anxieties are part of everyday life for me. Sport and fitness help me to escape from them.

When I’m training with mum, at an athletics track, skiing on a slope or doing lengths in a swimming pool it allows me to switch off and take my mind off my worries for that time. I feel a sense of freedom and a chance to break free of the strings of life for a short time. I believe that sports and being active has had a positive impact on my life. I’m a work in progress, probably always will be, but sport and being active has helped me see how I should take every opportunity in life and how small changes in lifestyle can have great results.

I hope to encourage other children and young people like me with disabilities to try to use exercise and sport to help them socialise with each other, try something new with the bonus of getting fit and active at the same time. They may even find a sport they enjoy and one day be competing like me at the Special Olympics.

As most parents/carers of children and young people on the autistic spectrum will tell you, asking your child to try something new, particularly anything relating to exercise, sport and movement can be stressful and challenging. Ryan definitely falls into this category. His experience in mainstream school put him off gym and his difficulty with motor skills due to being on the spectrum led to Ryan being reluctant to try new activities. I did try taking Ryan to a few soft play centres and multisport events but it ended in tears. I would often think “Why me?” or “Why is my child the one having a meltdown?” while the other kids were having fun. I was in time to learn that my amazing boy wasn’t having a meltdown, he was communicating the only way he knew how to at that point. Communicating his sheer frustration, because he was unable to verbally communicate how he felt not because he couldn’t speak but because it didn’t come naturally to him due to his disability. All the clubs Ryan attended had coaches with knowledge and expertise to support and work with children and people with disabilities but it also took a lot of time and patience to build relationships and that’s where I came in. I could be there, be the voice for him, help people to understand him and also learn from him and with him. 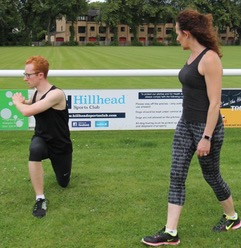 Any new activity would be a slow process but I was determined to try and get Ryan out and active. After it was suggested by his PE teacher and swimming instructor, that I take Ryan to an athletics club, because he’d managed the P7 final race, I gave it a go. We went to the track, where Red Star Athletics Club trained week after week, always taking things at Ryan’s pace and letting him get used to the new surroundings and people. Ryan saying hello to a coach was a big step in the right direction. We followed the same principles with ski-ing and learning to swim, being patient and learning that if I wanted Ryan to learn a new activity this was the way to do it. This approach paid off. One night he joined in for a short time. Eventually it led to Ryan competing at learning disability level both in swimming and athletics. He’s even tried a couple of events with Disability Snowsport UK and he recently took part in his second Special Olympics in Sheffield.

Ryan uses exercise to help him cope with the stress and anxiety that being on the autistic spectrum brings.  A few years ago I decided it was time to take a leaf from Ryan’s book, rather than just telling him what he should do for his sport, it was time for mum to join him and lead by example. I only really walked leisurely or went for the odd swim. I started to work out, taking my inspiration from Rya., Circuit sessions were fun. The fitness bug soon got hold of me.

My passion for health and fitness grew as I loved that we could do more together, we were fitter and healthier. This led to me studying and gaining my Level 2 Gym Instructor and Level 3 Personal Trainer qualifications. Having been diagnosed with depression and anxiety several years ago, I had tried various medications none of which made me feel truly better. However, like Ryan, I found exercise was my medicine. I feel life’s stress float away with a training session. My lifestyle was changing, both mind and body enjoyed working out. I had initially said I wouldn’t train Ryan as I was his mum not his PT. However, when circumstances changed and we were looking for a new PT I stepped in to work with Ryan to continue his training leading up to Special Olympics. We both realised it was different from just working out together, it worked as I “got him” we knew it was in fact a great partnership. Getting to work with my son is a joy. He listens carefully, works hard, and is keen to learn what will help improve his sport and certainly keeps me on my toes every session.

I have so much to thank Ryan for, being the most amazing son who makes me incredibly proud of him every day in life. No matter what challenges are thrown at him (there are many!), we deal with them. We use exercise to help with stress and to bring calm to our lives. We have fun with it and can see the health benefits from being active. We have been to two Special Olympics National Games and met lots of families and became friends with many through being active.  I have a new career, my business Metamorph-Fit was born from my passion for exercise, because I want to make a difference. I would encourage people to give it a go. Exercise and movement are about getting active and having fun too.